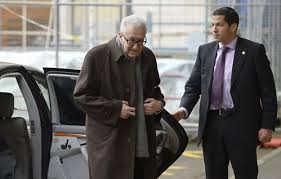 The Geneva II Conference revealed a state of confusion and chaos – to avoid saying fragility – that the national and regional powers and the Syrian parties are currently living. The fig leaf has fallen off both the big and the small.

Following two years of the methodical assassination of politics and the outcomes of a political solution, the Russians and Americans agreed on delaying the conference which began in the middle of June 2013 and ended six months after that, on January 22, 2014.

When the international power brokers talk of the humanitarian tragedy in Syria, the tendency to confess that more than half of the victims, 60 percent of the infrastructure and 65 percent of the immigrant and refugee cases happened after June 20, 2012, the date of the famous Geneva Communique, disappears. And that the cease-fire Kofi Annan suggested within his six point plan was an easy operation concerned with the main opposing sides (the Syrian army and the Free Syrian army) and the armed forces that are still in their fetal stage.

With all honesty and bitterness, I say today I felt within these months that I am the only lawyer on a lost case.I was one of the few that spoke about the Geneva Communique in the Cairo Conference on 2-3 July 2012. The main concern for the opposition was reaching a uniting national charter and a common program.

The concern of the Syrian National Council was neither to form any structure in the conference that can be a burden for a wider coalition for the Syrian opposition, nor forming a follow-up council for the conferences decisions. Meanwhile the French ambassador Eric Chevallier’s main concern was ending the conference with results he can carry to the Friends of Syria Conference in Paris on July 6.

On the other hand, the British ambassador, John Wilks, welcomed me with the National Coordination Body delegation in his house in Paris near the Elysee Palace in the middle of the same month, and spoke to us about the importance of working on a Plan B because, according to him, the Geneva Conference won’t have much of a chance.

With all honesty and bitterness, I say today I felt within these months that I am the only lawyer on a lost case; even though the executive office for the National Coordination Committee was clear and supportive for the side we defend. It is enough to go over the interviews that Abddul-Aziz al-Khayyer, Rajaa al-Nasr (both currently arrested), and Hassan Abdel-Azim have done, as well as my interviews and essays on the topic.

We were the first who offered positive critiques on Geneva I, which demanded serious steps for forming an international conference as soon as possible, while regionally, the importance of expanding the 16 sides participating in the first conference to also include Saudi Arabia, Egypt, and Iran, while in Syria [we demanded] the importance of getting out of the logic “anyone can represent the people” for providing a balanced and convincing representation for the Syrian opposition.

After the formation of the Syrian National Coalition in Doha, the political solution struck at the core. First of all, the coalition was considered the only legitimate representative for the Syrian people and was given the Syrian seat in the Arab League in Doha. Second, refusing dialogue and negotiations before Assad is gone, means putting ” the Geneva Communique” in the freezer. There is no space for mentioning the accusations that we received only for holding on to the political solution and the Geneva Communique.

The balance of powers on the ground have changed. Jihadist militias have advanced beyond the Free Syrian Army on the ground, Hezbollah entered the Qusayr Battle, the borders opened up with the rush of Salafi jihadists from tens of countries, and other borders opened for more than 5,000 Shia fighters supporting the Syrian regime.

That’s when the international sides showed more consciousness concerning the Syrian issue, and the importance of going back to taking it seriously and to the political solution; the Geneva conference. In one day, it became the “International Good Morning” TV series. Obama figured out that “the military ways don’t achieve democracy” and Hollande came to us saying “We should hurry towards Geneva” and Ban Ki-Moon claimed that “military victory is a delusion”. As for Gül, he broke away from Erdogan and said “a limit must be put against the bloodiest war in Syria”.

The eight countries agreed on the importance of fighting terrorism. Nothing was left of the jihadist speech but Bandar Bin Sultan and Khaled Attieh. The final blow for the commanders of the Free Syrian Army was the formation of the “Islamic Front” whose first achievement was not just raiding the FSA’s ammunition storage but also threatening everyone who was to be involved in Geneva.

The opposing Saudi voice receded with the absence of Bandar bin Sultan, and Qatar was asked to do what it is usually asked to do in similar situations with the American side, so the road was more approachable to set the conference.

I offered my point of view for the three sponsoring parties, and I kept on repeating it to them in what I wrote and shouted; that the basis in making Geneva successful is not just meeting, and that the poor image given to the terms “debates” and “Geneva Communique” that dominated over the past two and a half years actually calls for practical procedures that precede the conference, and to give it a popular caretaker, which is important to achieve any sort success. We, in the Coordination Committee, demanded a decision from the Security Council that puts all the non-Syrian fighters outside any international legitimacy.

I also told everyone I met, “the cease-fire today was a complicated operation to set-up so the concentration must be on stopping the war crimes and respecting the rules of war”, as well as the importance of releasing and letting go of women, children, and the sick who don’t have anything to do with either national security nor do they affect the balance of powers.

A political solution must be revived with new peaceful standards and a different methodology that allows the Syrian person the right to hope that this dark tunnel does indeed have an end.We called on banning kidnapping from any sides and releasing as many kidnapped as possible, in addition to the removal of barriers for medical aid to Syrian civilians. But as the poet Amro Bin Maad Yakrab says:” If they were alive, they would’ve listened, but those you’re addressing are not alive.”

British-French-American concerns were to veto any part of the opposition that don’t fall under their control, or that are financed and aided by others (Turkey, Saudi Arabia, and Qatar). Mr Robert Ford came with an opposition delegation who agreed to attend Geneva (58 members out of the 120 in the National Coalition, which means half of them formed the delegation) in a screaming assault against the oppositions right to form its own delegation, according to the Tenth Paragraph of the Geneva Communique.

Meanwhile, Mr. Bogdanov quit interfering with forming the governments delegation following his attempt to create a balanced delegation containing a minimum number from the different sides involved in the present government. This case of the Russian resignation came in the name of “respecting the Syrian decision”, and the American domination came in the name of forming an opposition delegation harmonious under the Western and Gulf states; which means placing a Molotov cocktail in Hall 16 and the continuous perseverance to prevent an explosion that will defeat the promised hope of a political solution.

The opposition delegation legitimacy and representatives are infected with an illness found even within the coalition, in addition to their lack of negotiation experience. As a result, the ceiling of demands will rise to prove that they were right even though they are very much involved with the armed groups and the rest of the Syrian political opposition.

The government’s delegation came to remind them that ‘not everything you want is what you get’, and that Michel Kilo and the negotiation teams claim about the presence of 185,000 Free Syrian Army soldiers behind the opposition delegates has nothing to do with the reality on the ground and geography, as well as focusing on the weak points of the coalition and concentrating on battling terrorism. Long story short, the ones involved killed Geneva II and no one has the guts to bury it.

When the picture was clear to me around the magical preparations for the conference on December 22, 2013, I told the Russian side that I personally am not interested in what’s going to happen because I hate planned failure.

Even though the Coordination Committee insisted that I participate and follow up with the conference, I apologized at the Cairo meeting with Ahmad al-Jarba and followed up calls with the sponsoring sides. We arranged with the Preparation Board for the success of the project. We also increased our calls to ensure the greatest number of political and civil representation for it.

Geneva’s failure means a huge state of catastrophic emptiness on the humanitarian, national, and political level. A political solution must be revived with new peaceful standards and a different methodology that allows the Syrian person the right to hope that this dark tunnel does indeed have an end, and that the Syrians creative imagination hasn’t stopped beating, and that it is capable of drawing a path for salvation from war and dictatorship outside dependency and subordination.

Haytham Manna is the head of the National Coordination Committee

De-railing of Geneva II from the Basic Tracks

Nelson Mandela will remain with us and among us

Syrians can be reconciled – through negotiation, not violence

Syria: after Assad falls, what then?

Will Marrakech assassinate the democratic project?